The Most Dangerous Act On TV?

Posted on May 8, 2010 by britainsgottalentuk

You won’t believe what these guys will attempt on tonight’s show! This could be the most dangerous act you ever see and it’s not to be missed – somebody could actually die tonight! 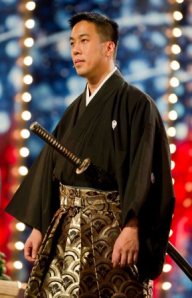 “Simon is always saying he would like to see more dangerous stunts, what I’m about to do today is the most dangerous thing he will ever see. It’s a blind Samurai sword act and there is a very real chance of my helper being injured or killed.”

To say Ant looks concerned is an understatement… he turns to Hayashi’s helper, “and you’re cool with that?” He nods nervously as they walk on stage…

Hayashi is blindfolded after showing the judges that his swords are sharp.  The helper has cucumbers attached to his body and Hayashi intends to chop them up blindfolded. Time to hide behind the sofa… 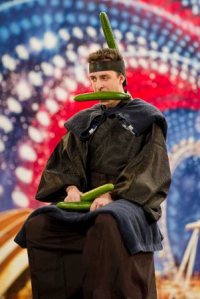 The judges gasp in amazement and Ant & Dec are jumping up and down in the wings but will it all be too much for the Royals? Never mind that, it’s all too much for me!

Somebody call Hannibal Lecter… I think brains could be on the menu tonight! 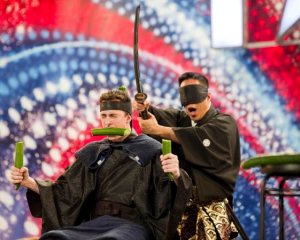 Don’t forget to join me for the Live Blog from 8pm tonight and leave your views. I can’t wait to hear what you think as each act performs… it’s gonna be a great show!

This entry was posted in Uncategorized. Bookmark the permalink.

10 Responses to The Most Dangerous Act On TV?